Posted by Ayesha Aslam Faisal at 8:10 AM No comments:

My Nano passed away a few days ago.

Born in 1930, she was intensely patriotic, only as those who experienced and lost everything at Partition can be. I remember her stories of growing up in Amritsar. She told of how she used to go to Stratford College on a tonga driven by Baba Ghani. She told us about how there was a curfew at one time (when Dr. Firozuddin was the principal) and how she managed to get back safely thanks to Baba Ghani.

At the time of Partition, it was Ramzan and Nano and her family had locked up their home and come to Lahore for a few days, assuming Amritsar would be in Pakistan and that they would return home to celebrate Eid. She told us of how her khala who came later, had to flee (she was brushing her hair at the time and was rushed out of the house holding her comb but with no shoes on her feet) as houses were being set on fire around their neighborhood. Nano told us how her father used to go to the railway station in Lahore later to meet trains coming from Amritsar to see if any of their friends and neighbors had arrived.

Despite being the most honest person I know, she proudly used to tell us how she voted illegally for Pakistan in a referendum held pre-1947, despite being under age and lying about how old she was. Her love for Jinnah would come pouring forth when many, many years later my sisters and I were in school and needed help doing our Urdu summer holiday homework. She would instruct us to write our essays about Quaid-e-Azam when we had to write about about a ‘yaadgar’ personality.

Nano went to Gordon College in Pindi and later was the first female graduate from IBA in 1958 with an MBA degree. She graduated from the London School of Economics with a Master’s degree in Economics in 1966. She was one of few women on the management team of Lever Brothers soon after. Later she joined the Pakistan Civil Service. She was a Deputy Secretary when she was placed on special assignment as a personal secretary to Nusrat Bhutto. She told us of how she met Zia-ul-Haq later. Someone advised her that she should cover her head prior to meeting him. She replied ‘I don’t cover my head. Why would I do it for Zia-ul-Haq’. There is a photograph of her standing next to Zia-ul-Haq with her short hair (uncovered) wearing an elegant sari. She retired as Joint Secretary and taught at the Civil Services Academy in Lahore for many years. These are the things that most who knew her have heard.

There are countless other stories not as well known. How she used to be so particular about her evening tea time (and the temperature of her tea. Before I served her any tea I’d give it a 30 second shot in the microwave no matter how hot it already was); how she would show up with a Shezan cake (those 1990s fluorescent yellow ones) or orange ice lollies (this is the time of the paper wrappers) and say ‘chalo chai banao’; when she would finish a glass of ice cold water and dump the remaining 2 drops over her head for the cooling effect and when you went to visit her, she would insist on stuffing you with something or the other. She would go into the kitchen and say have biscuits/have ice cream/have whatever else was in the fridge or cupboards. You had to eat something obviously or there would be a ‘Come on!’ (which no one dare say no to).

My son was her first great-grandchild and she adored him. When he was older and was at an almond loving stage for some reason, she would have a jar of almonds by her bedside which she would insist he partake of. And then there was that bottle of Fox sweets. I found a video of him age 4 putting on some weird aerobics display for her and her advising him to get my dad to join him in the exercise.

On the day of her funeral, my sisters and I sat and exchanged our Nano stories. These included her coming over to babysit us when our parents were away and complaining about how uncomfortable the beds in our house were. Whenever we would come back from holiday, we would find a well-stocked fridge with milk, breads, eggs and anything else we might immediately need. One time she was driving my youngest sister somewhere who was sitting in the front seat. The back door was apparently open and when she said ‘Nano, the door is open’, Nano said totally calmly ‘Well close it then’ without stopping. My sister then had to maneuver backwards from the front seat and slam it shut. Sometimes if you visited her at night, she used to be in bed with her reading light, which was mounted on the headboard, angled towards the newspaper or book in her hands, glasses on the tip of her nose and she'd peer over them and smile at you.

I will also miss the food Nano made. She made the best hareesa in the world. (Also the best savaiyaan every Eid. Oh and she used to make me the most amazing meat paste on request frequently. Teenage snack food on toast). There was a time when Eid lunches were always at Nano’s and she made delicious feasts.

A lot of people have messaged, called and visited to condole - those who were expected to and those who were unexpected and thus all the more gratifying. Each of those who acknowledged the loss have shared their own stories of her. One lady used to go to a Quran translation class with Nano and she said the teacher disliked any questions during her lecture but ‘you know how your Nano was so passionate and argumentative, she always had many queries’. There are many who didn’t even know her well (or at all) but who recognized her for the strong woman she was. Nano has been described as a 'trailblazer', ‘formidable’ and of ‘impeccable integrity’. She was a fiercely independent, dynamic and straightforward person who was truly far ahead of her times.
Posted by Ayesha Aslam Faisal at 1:36 AM 3 comments:

how does it feel
using no punctuation
words with no interruption
no commas or caps
no periods or colons
semi or otherwise
seems so barren
an unending wordscape
where to end
just like that
so abrupt
Posted by Ayesha Aslam Faisal at 12:52 AM 1 comment:

The People You Tolerate

So many people you are forced to tolerate.

The ones you can't actually do anything about.

The blood relations - sometimes the ones who are too close to avoid and then the ones who you could avoid but can't because the orders come from above ("Ammi said we have to go." - End of story).

Then there are the ones you choose to tolerate (the one you berate yourself for tolerating but still do).

The bosses - You can still make excuses to yourself for this category. After all you need that pay check at the end of the month (at least till something better comes along or you reach the end of your tether - whichever comes first).

These are the ones who misbehave off and on and you choose to ignore it and not say anything - sometimes because it doesn't concern you directly and sometimes because you think did they really say that? Or that they are less intelligent and wouldn't be able to comprehend the sarcastic comment you would direct at them anyway.

"I would have said that to him/her but I'm too polite."

"I should have said this but s/he wouldn't have understood it."

"I'm going to say this to him/her next time..." (Except that next time never comes).

Infinite loop.
Posted by Ayesha Aslam Faisal at 1:24 AM No comments:

Son revising for a History exam...(but actually thinking up jokes) -

What disease did the book have?
Diary-eha.

What disease did the pipe have?
Tube-rculosis.

What disease did the oil have?
Den-ghee.

What did one bottle of oil say to the other on Valentine's day?
Oil love you.

What disease did the pencil have?
Color-ea.

Why did the pig faint?
Due to brain ham-errage.

Which dry fruit scream the most?
Aaaaaa-lmonds.

Which is the rudest dry fruit?
Pea-nuts.

Which singer is always angry?
Mad-onna.

Which singer is an insect?
Sha-keera.
Posted by Ayesha Aslam Faisal at 10:49 AM 1 comment:

A year and more of writer's block,
Time to pause and take stock,
Letters and words on a page,
Mind still feels like it's in a cage,
At my head please throw a rock?
Posted by Ayesha Aslam Faisal at 9:54 AM 1 comment: 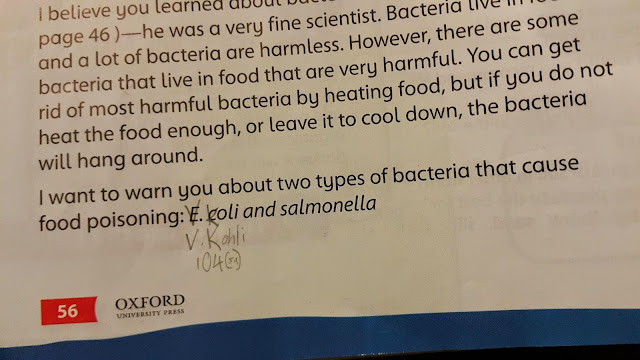 Ayesha Aslam Faisal
Author of "Lost and Found" and "The Mealtime Battle". Butler/governess/housekeeper/nurse/maid/foot(wo)man aka mom to HRH. I do other things too. Really. Movie buff. Fed-fanatic. Barca-barmy.